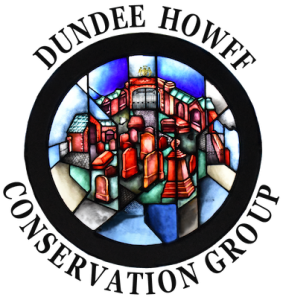 The Dundee Howff Conservation Group was formed in 2014. They have been involved with recording the Howff with input from Historic Environment Scotland. So far they have carried out some recording sessions which are more in depth than I have here, with higher resolution images and details recorded using a standard transcribing form.

They have also made a plan which has been produced using data from laser scanners and GPS, the results of which will help identfy the relative positions of the memorials verses how they were drawn up in the 1832 plan.

Interestingly whilst this survey was being carried out archaeologist Dr Oliver O'Grady had noted that stone 188 looked medieval in origin, whilst it does have a similar shape to coffin lids found during excavation of the foundations of the new East church in 1842, it's true origin is yet to be established.

The Dundee Howff Conservation Group have also been involved with transcribing the burial registers held with the Dundee City Archives.

The final intention of the group is to deposit the data gathered with the Dundee City Archive, Dundee City Council, University of Dundee, Abertay University and the Maritime Museum in Portsmouth.